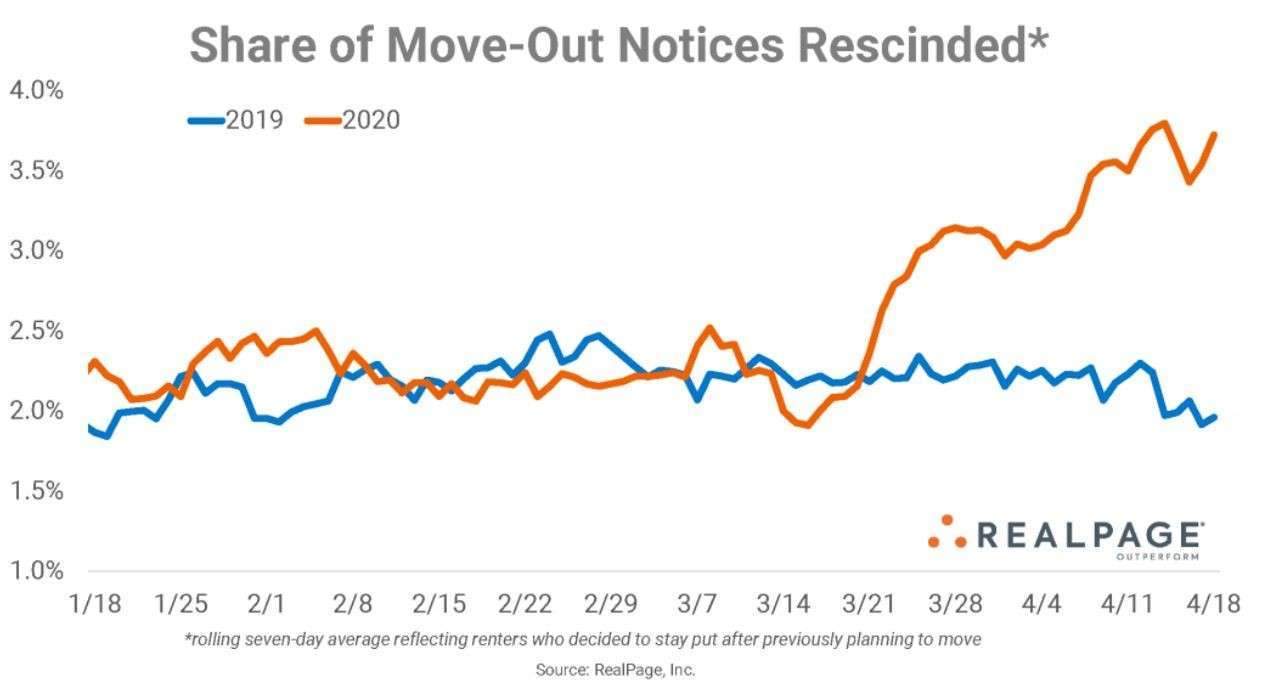 This is typically the time of year where temperatures move up and apartment renters move out, shopping for better deals or relocating to new neighborhoods. Instead, COVID-19 has them sheltered in place. And in turn, we are seeing multiple indicators of an abrupt and unusual shift in seasonal resident turnover patterns. More renters are canceling move-out plans and requesting short-term lease extensions, and property managers are offering unprecedented flexibility to accommodate them.

That is a plus in the short term. Higher renewal demand offsets a drop in new-lease demand. Current trends in rescinded move-out notices and in lease renewals could propel the national average retention rate near 60% – unheard of levels for most of the country.

But the implications of a huge spike in leases extended on short terms into summer months also portends a potentially big looming challenge for apartment owners and managers: a summer leasing season with heavier exposure to lease expirations and lighter new-lease demand than we would typically see in a normal summer.

More on that shortly. Here’s where we stand right now.

First, we are seeing a huge spike in rescinded non-renewal notices. This occurs when renters who previously intended to move out change plans and decide to stay put. Compared to the same time last year, rescinded notices have nearly doubled. Looking at rolling seven-day counts on a same-store basis as of April 18, 3.7% of notices were rescinded, up from 2.0% at the same time last year, according to data from RealPage’s property management systems. That may not appear like a big number, but that increased share sustained for 30 days translates to tens of thousands of additional apartment households staying put.

Most rescinded notices came from renters who made move-out decisions prior to COVID-19 shutting down the U.S. economy. Apartment renters who received renewal offers since that point likely have leases expiring sometime between late April and June. The share choosing to renew or go month-to-month will certainly increase as many renters won’t or can’t move. (Retention is calculated as of the lease expiration date.)

As a result of rescinded notices, more month-to-month leases, and more renewal demand, the U.S. apartment industry has seen an unusual surge in retention rates counter to the normal seasonal patterns. For the seven days ending April 18, retention jumped 863 basis points (bps) compared to the same time last year. For April to date, the increase measures about 550 bps.

In normal times, we’d avoid making hay over a mid-month retention rate, since most renewals are still processed at month’s end. But these are not normal times. And furthermore, retention rates were trending only slightly above 2019 levels before jumping higher when COVID-19 hit in the second half of March. Typically, retention rates are highest in February when it’s cold and few people want to move. For the past decade, we’ve seen an average decline of 90 bps in retention between February to March. In 2020, retention actually inched up 30 bps to 54.1%, easily the high mark for any March since RealPage began tracking retention two decades ago.

As property managers have these conversations with renters, they’re finding many want to stay put, but only for the short term while they wait out COVID-19. Apartment managers are providing unprecedented flexibility to help them out.

For starters, many apartment operators are following the National Multifamily Housing Council’s guidance to keep rents flat on renewals (which we do see playing out in our data),  offer payment plans, and hold off on evicting delinquent renters  – even where they’re still legally able to.

But they’ve also gone even further. In some cases, they’ve allowed renters to remain in units that were already leased for a future date by a new resident – leading to a scramble to then re-sell the new renter on a replacement unit. Many have waived premiums for month-to-month leases or other short lease terms.

These accommodations are the right things to do in this environment and reflect how much apartment managers have done to step up. But they are not without risk. One big challenge looms.

Extending tens of thousands of leases into summer introduces a potential glut of additional availability. This would be problematic for two reasons.

First, most apartment operators intentionally schedule a disproportionately large number of lease expirations for summer, when new-lease demand is typically strongest. These were decisions made long before COVID-19 based on historical demand patterns.

Second, the apartment demand outlook appears pretty bleak this summer due to mounting job losses and potentially prolonged closures in sectors like entertainment, hospitality, education, and retail. Where we sit today, it’s difficult to imagine a “return to normal” scenario this summer where all restaurants and retailers re-open, spending ramps back up, and 22 million newly unemployed Americans find work.

Adding one and two together sums up to the big challenge we noted earlier: a summer leasing season with heavier exposure and lighter new-lease demand than we would typically see in a normal summer.

How do you manage through that challenge?

Lease expiration management becomes more critical now than ever. Under normal circumstances, you would offer big premiums for short-term leases to help stagger expirations. That may not be an option right now for property managers concerned about both optics and the reality of taking care of residents in need. Even without short-term premiums, though, you can certainly incentivize longer-term renewal commitments.