First-quarter GDP contraction is not a concern. Gross domestic product fell by an annualized rate of 1.4 percent in the opening quarter of 2022. The reduction was driven predominantly by a widening trade deficit, as import volumes climbed rapidly while exports declined. With stimulus concluded, less government spending also contributed to lower GDP. Excluding these two categories, metrics were much more positive. Personal consumption and private investment both added to GDP last quarter, and domestic purchasing, adjusted for inflation, also increased by 2.6 percent. These figures underscore that the economic foundations of consumption and investment continue to expand, even as international trade faces ongoing hurdles. 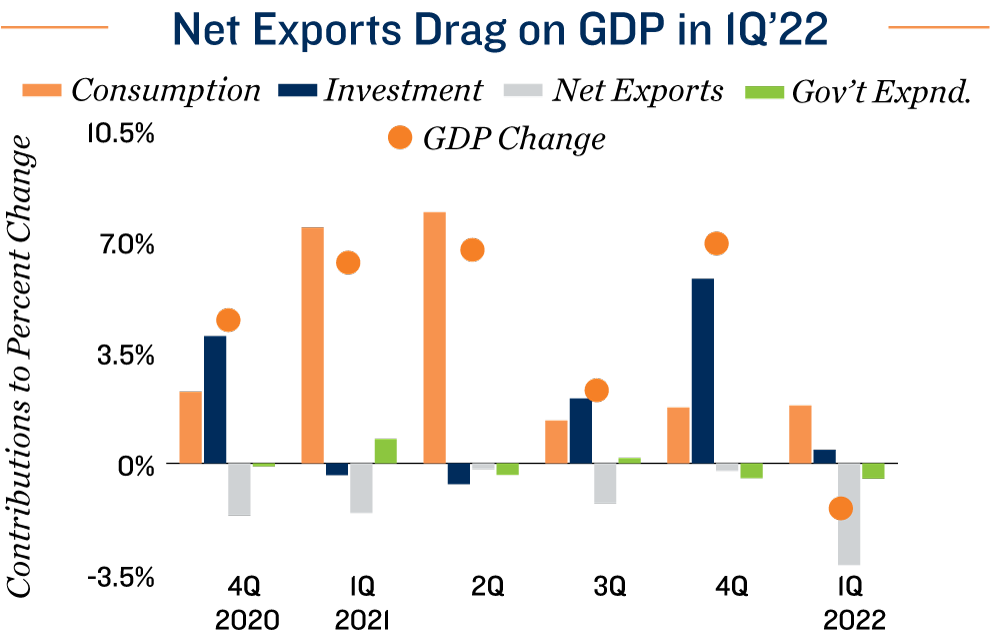 Added imports benefiting the industrial sector. Imports flowed more readily into the U.S. last quarter — a drag on GDP but a relief to consumers buying an elevated amount of goods and retailers striving to replenish safety stocks. The 17.7 percent swell of import activity was a boon for the industrial sector, which provides the necessary infrastructure to move these items from ports to final destinations.  Industrial vacancy hit a record low of 3.8 percent in March and is anticipated to inch down further in 2022, despite a record amount of construction. Demand for warehouses and distribution facilities, in particular, is unlikely to abate as intermittent production shutdowns in China will continue to hamper international trade. While prompting retailers to enhance their storage space, this volatility will continue to cloud GDP and economic growth this year.

A tight labor market bolsters housing demand. Despite the first-quarter slowdown, the economy is reporting multiple green flags. The labor market has improved remarkably since spring 2020, with the unemployment rate back down to a historically tight 3.6 percent. Ample job opportunities facilitate household formations and continue the ongoing need for housing. Fewer single-family homes listed for sale have directed demand to Class A rentals, which offer flexibility and amenities that homeownership lacks. Class A vacancy held at a record-low 3 percent in the first quarter, extending a period of double-digit rent growth in the multifamily tier.

Fed expected to hike rates again. In early May, the Federal Open Market Committee will raise the federal funds rate by up to 50 basis points. While the first-quarter GDP drop could change decisions, inflation pressures are high. Many of the same trade disruptions that influenced GDP fuel this pricing pressure, necessitating increases in interest rates. Additional capital costs could sway investors toward assets with shorter lease terms, namely apartments, self-storage facilities, and hotels, which allow rents to be more rapidly adjusted to changes in the marketplace.

GDP forecast still calls for growth. Despite last quarter’s slowdown, GDP was still up 3.6 percent over the prior year, and signs point toward further economic growth in 2022. Greater aggregate savings lead to more consumer spending, while the tight labor market fosters wage increases. Although inflation is eroding some of the real value of incomes, households’ discretionary funds are climbing overall. Clouds are on the horizon, however. A resolution to the war in Ukraine is elusive, while trade flows will be volatile. As such, some economists are now calling for the GDP growth forecast for 2022 to fall under 3 percent.