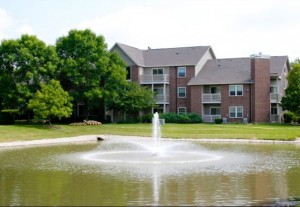 An apartment investor from Rochester, N.Y., acquired a 428-unit apartment complex in northwest suburban Schaumburg, one of a flurry of suburban apartment deals expected to wrap up by yearend.

Home Properties, a real estate investment trust, bought the Lakes of Schaumburg for $67.1 million, or $156,800 a unit, including the assumption of a $33 million mortgage on the property, according to Cook County property records. The REIT acquired the complex Nov. 12 from a joint venture led by Naperville-based Marquette Cos. that bought it for $47.3 million in 2010.

The Lakes of Schaumburg, 801 Belinder Lane, is one of several suburban multifamily properties changing hands in the waning weeks of 2014, part of an annual push by investors to complete deals by the end of the year. Twenty-seven suburban apartment properties traded for a combined $779.1 million by October, according to a report by Appraisal Research Counselors, a Chicago-based consulting firm.

With several more properties on the market and some under contract, it’s possible that suburban sales for the year could top the $1.17 billion total for 2007, the last sales peak, said Appraisal Research Vice President Ron DeVries.

The fourth quarter should “have huge volume for closings,” he said in an email. “Surpassing the prior peak would not surprise me.”

Suburban apartment sales dipped as low as $471.5 million in 2009 but totaled $1.05 billion last year, according to Appraisal Research. Apartments remain a favored sector among real estate investors amid a broader shift away from home ownership and the rebounding economy, which have combined to push rents in suburban Chicago to new highs.

Home Properties and Marquette executives were not available late yesterday.

Home Properties owns 122 apartment properties with 42,250 units around the country, mainly at the mid to lower end of the market. Before buying the Lakes of Schaumburg, it owned seven properties and 2,566 apartments in the Chicago area with an average rent of $953 per month, according to a third-quarter report. The REIT’s most recent prior deal here was its $20.2 million acquisition in 2011 of the Gates of Deer Grove, a 198-unit property in Palatine.

The Lakes of Schaumburg was 99.1 percent occupied in the third quarter, with quoted rents ranging from $988 to $1,450 a month, according to Appraisal Research. The Chicago office of HFF brokered the sale of the property for Marquette, which also recently sold Bourbon Square, a 612-unit apartment complex in Palatine, for $97 million.