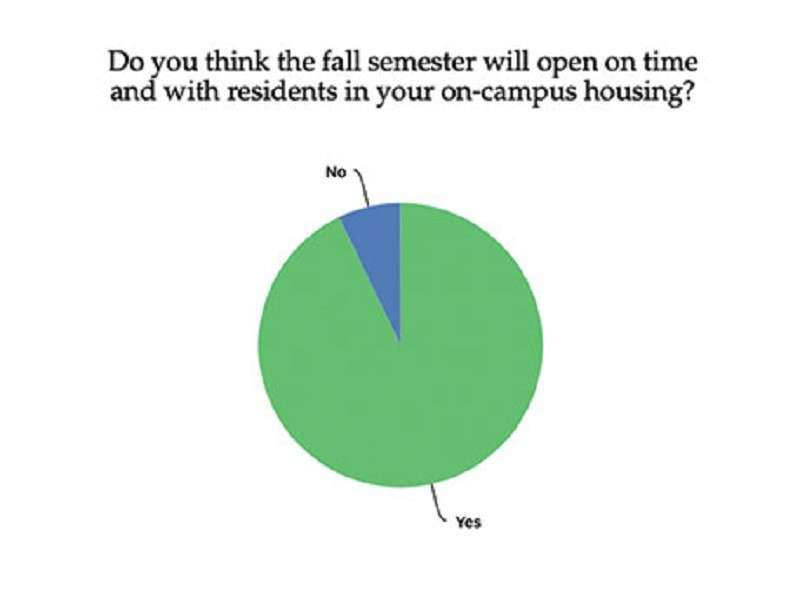 The outlook for the fall semester was overwhelmingly positive, with 93 percent of respondents indicating that they expect fall semester to open on time with residents in on-campus housing.

The coronavirus (COVID-19) pandemic has had a major impact on all aspects of on- and off-campus student housing. In an attempt to better assess that impact and the sector’s outlook for the future, Student Housing Business (SHB) conducted a survey of industry professionals over the course of several weeks in May.

The survey was segmented by industry function for specific elements of the business, allowing SHB to better understand the pandemic’s distinct influence on each segment of the industry.

Of the survey’s 569 respondents, 79 defined their role in the industry as that of an on-campus housing officer or operator. In this segment of the industry, 38 percent of institutions laid off or furloughed employees, and 24 percent instituted pay cuts.

Of those polled, 88 percent of universities saw residents leave behind clothing and belongings when they moved out in March following evacuation orders due to the pandemic, and 67 percent had not begun the process of turning on-campus housing rooms yet.

Looking toward the summer, 60 percent of respondents indicated that they do not anticipate summer camps, internship programs, students living in on-campus housing, or courses over the summer.

Of the group that operates on-campus housing as part of a public-private partnership, 57 percent did not close their doors at the same time as traditional on-campus housing. Sixty-nine percent offered the same rent concessions and forgiveness, however.

The outlook for the fall semester was overwhelmingly positive, with 93 percent of respondents indicating that they expect fall semester to open on time with residents in on-campus housing. Eighty-eight percent expect there to be modifications to housing and dining as a result of COVID-19 in order to promote social distancing. Ninety percent of institutions polled were developing those plans at the time of the survey.

In terms of quarantine planning, 79 percent of respondents indicated that their institutions were planning on keeping an existing on-campus housing facility offline to use as potential quarantine space during the 2020-2021 academic year.

Seventy-nine percent of respondents believe that future on-campus housing projects will need to take social distancing and other implications from COVID-19 into account, but 83 percent do not anticipate their institution moving to renovate existing traditional residence halls in direct response to the pandemic.