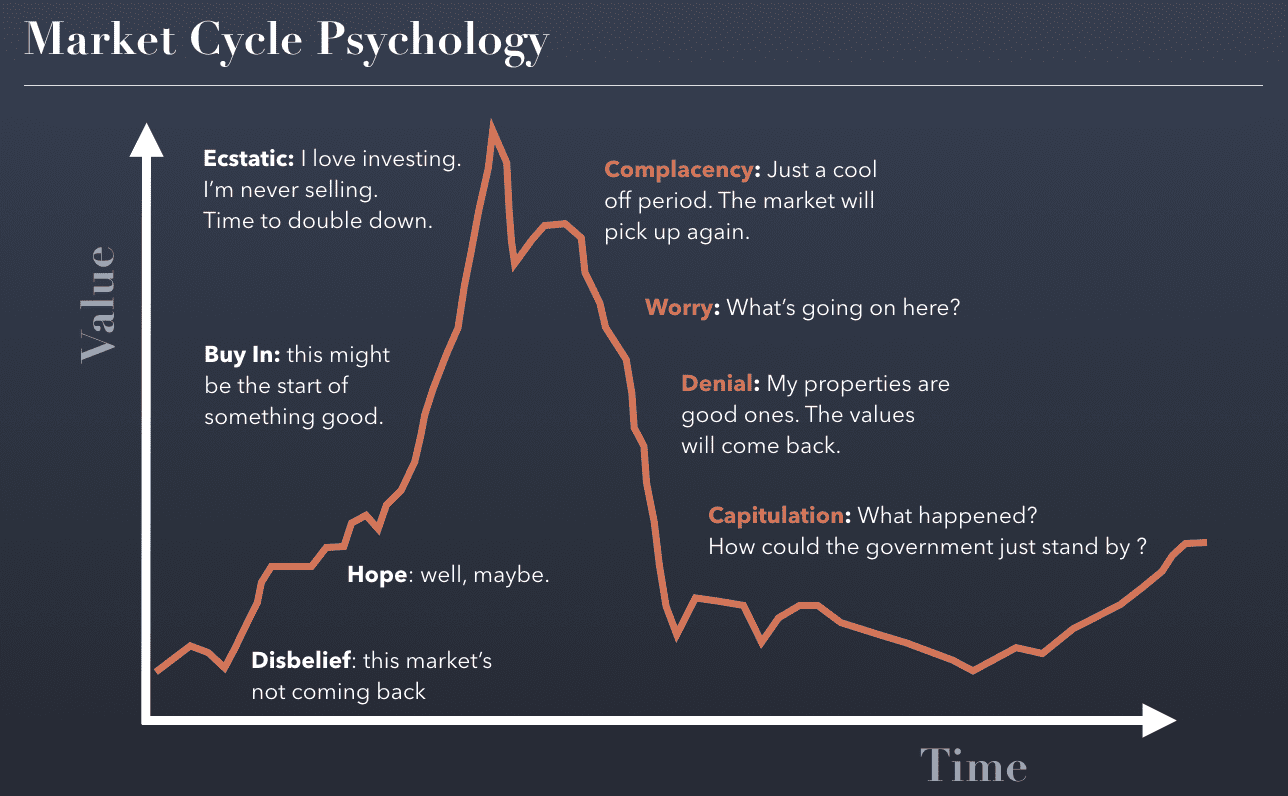 The Dangers of Selling Commercial Property Too Late

cost those who chose to sell commercial property an average of

Complacency is the most dangerous state to ignore.

Then we expect the market to pick up again and continue with its growth phase.

But, the market continues to deteriorate and worries creep in as we wonder what is going on. Next, it is normal to say to yourself that your investments are good ones that they’ll ultimately come back.

When the market continues to soften until it seems there is no hope in coming back, that’s the absolute bottom of the market and the worst time to sell.

This point of capitulation is one of surrender and of asking how the government could let something like this happen.

In order to avoid loss, people will overvalue what they own.

That is what Richard Taylor, Daniel Kahneman, and Jack L. Knetsch identified with the Endowment Effect. In fact, Kahneman and Knetsch won the Nobel Peace Prize for their research in this area of behavioral economics.

It’s normal for people to overvalue what they own.

But, it was Carey Morewedge’s research into the Endowment Effect that revealed that it’s not loss aversion that leads to overvaluation, it’s ownership and identity.

Morewedge found that it’s our sense of possession that creates the feeling of an object being mine, which then becomes a part of our identity.

Why is it so difficult to sell commercial property in a market decline?

According to Brafman and Brafman, authors of Sway: The Irresistible Pull of Irrational Behavior people will go to great lengths to avoid perceived losses.

What’s more, people also succumb to their will to recover what once was.  They will spend whatever it takes not to lose, be it time, money, or emotional resources.

Imagine watching someone playing craps in Las Vegas. When they are on a roll, taking in their winnings, they race through the growth phase, reaching the peak of the game.

But what happens when the tide turns and they start to lose?

They enter the complacency stage, call it a short turn of bad luck, and keep playing.  They believe they will return to the top. But their bad luck continues.

By waiting to avoid losses, people hold off and then sell at the wrong time — maximizing their losses.

They lose their winnings, keep playing and generate losses. They would rather hold onto the idea of getting back to where they were at almost any cost than realizing their loss and moving on to another opportunity.

No doubt, an abundance of free information in the form of market data, blogs, market reports, and online opinions on what’s happening in the market is available.

When we aren’t sure what to do, we often consult friends, family, and non-commercial real estate advisors for input. Unfortunately, these people will not want to be the ones to say sell because it is easier to say no and risk being wrong than to say yes and risk not being right.

Plus, most of these folks will not have the data that you have seen here. These people are more likely to share anecdote based advice like “My friend made a killing in real estate. You should hold on, it will come back.” Remember, people who made this mistake lost in 2008-2010.

The problem is that most traditional brokers do not specialize in Commercial Real Estate, Investment Sales and further specialization by property type.

Marcus & Millichap is a leading national firm specializing in commercial real estate investment sales, financing, research, and advisory services, with offices across the United States and Canada. Our services are customized and personalized to meet the diverse needs of private investors, professionals, and institutions.

With over 80 offices and nearly 2,000 sales and financing professionals across the United States and Canada, Marcus & Millichap brings national experience to local market expertise.

We don’t just market properties; we make a market for each property we represent. Our innovative and exclusive communications network (MNet) allows us to present your property to more qualified investors than any other Broker. The process is orchestrated to maximize a competitive bidding environment to proactively solicit higher sales prices for your property.

Marcus & Millichap clients on average achieve 12.3%* higher sales prices for their properties over other firms.

Contact Us to evaluate your commercial real estate to best advise how you can seize high market values.

*Based on analysis for closed transactions between 7/1/2018 and 6/30/2019 for select U.S. markets comparing pricing achieved from Marcus & Millichap versus local, regional and national firms. Source: MNet and CoStar.