Follow me
Latest posts by Randolph Taylor (see all)

As has been the case for much of the recent crisis,  borrowers are continuing to try to capitalize on favorable rates to refinance apartment properties—that is, when they can find lenders willing to close deals.

Long term interest rates—like the yield on 10-year Treasury bonds—fell below 1 percent at the start of the economic crisis caused by the spread of the coronavirus in March 2020 and stayed below 1 percent well into mid-summer.

Freddie Mac and Fannie Mae lenders have proven to be consistently willing to make loans to qualified apartment properties with interest rates fixed at a spread over these historically low-interest rates. Other types of lenders, including many banks and life insurance companies, have been more cautious.

“The outlook is for a continuation of low rates through the end of the year,” says Tony Solomon, senior vice president, and national director of Marcus & Millichap Capital Corp. “Could rates fall even lower?  Sure, maybe a little, but they are very low now and we know that there is an ‘open window’ of various capital sources for the right asset and borrower.”

However, many lenders have become much more selective about the loans they are willing to make—even though the number of potential borrowers has shrunk sharply in the crisis caused by the COVID-19 pandemic. Relatively few investors are eager to borrow money to buy apartment properties at the high prices sellers still expect. And though low-interest rates create a huge motive to refinance, many properties still have years left before they can prepay their old loans without expensive defeasance or yield maintenance arrangements.

“Most lenders really heightened their inspection of an applicant’s creditworthiness and liquidity,” says Solomon. Those lenders that did stay in the market also increased their ‘insurance’ by requiring various escrowed reserves of approximately six to eighteen months of principal, interest, property taxes, and insurance, many requiring add equity to cover those reserves.”

Lenders of all types are likely to make fewer loans to apartment properties in 2020 than they did the year before—but for  Freddie Mac and Fannie Mae lenders, the decline in lending volume is likely to be less dramatic.

“Freddie Mac and Fannie Mae have been very supportive of the market,” says Mitchell Kiffe, senior managing director and co-head of national production for debt and structured finance for CBRE Capital Markets, based in McLean, Va. That’s partly because of Freddie Mac and Fannie Mae’s mission to provide capital at all stages of the real estate cycle. “They are designed to be countercyclical.”

Apartment borrowers still get the lowest interest rates on permanent loans from these agency lenders. “We have seen some rates from the agencies over the past few weeks for well-located, well sponsored multifamily properties even dip into the sub-3 percent range,” says M&M’s Solomon.

In select cases for low-leverage loans,  Fannie Mae and Freddie Mac are both offering interest rates as low as 2.5 percent. They set higher interest rates of 2.75 percent to 3.25 percent for loans that cover more of the value of a property, according to CBRE.

“If you are a long-term holder, that is pretty hard to decline, even if you have to pay a pre-payment penalty,” says Dave Borsos, vice president of capital markets for the National Multifamily Housing Council.

These low-interest rates are a burden to life insurance companies. “The life companies are back on a conservative basis,” says Kiffe. “However, they cannot generally bear loans at those very low-interest rates… 2.75 percent is about as low a coupon rates as they can offer.”

Life companies have also developed a habit of lending to apartment properties. They made more permanent loans to multifamily properties than any other type of commercial real estate, over the past few years according to the American Council of Life Insurers. They keep returning to apartments, even though they can get much higher interest rates by making loans to other kinds of commercial real estate, like grocery-anchored shopping centers.

Banks generally prefer to make loans with shorter terms and floating rates. Some make longer-term loans to apartment properties—but even that has become less common in the crisis caused by the coronavirus. 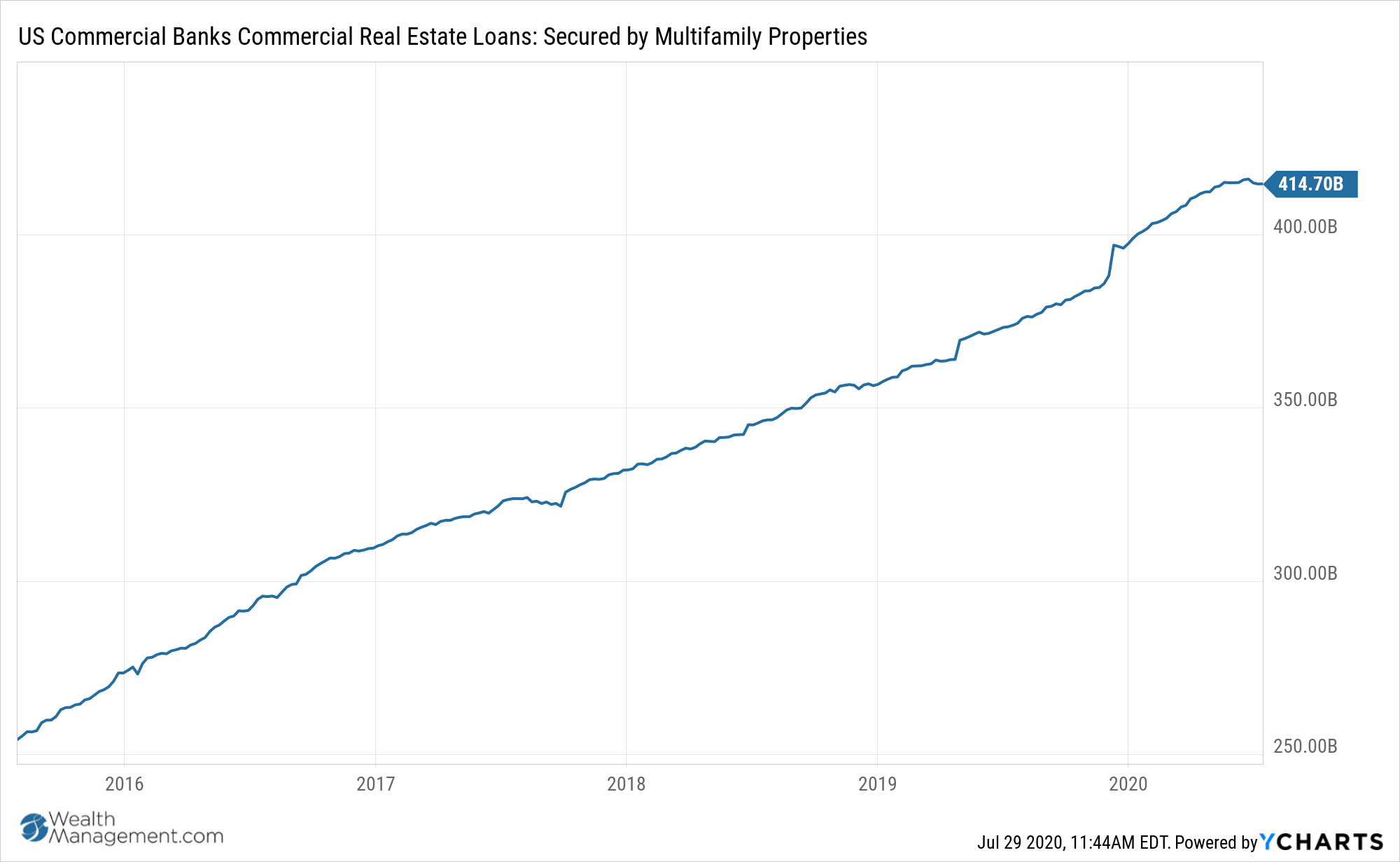 “Big banks, by and large, are not making loans to apartment properties,” says Kiffe. “They are only making capital available to their best customers.” That’s partly because of capital requirements that force them to keep billions of dollars in reserves as the economy weakens, to cover risks including loans made under the federal stimulus program.

“Local and regional banks are still lending, though spreads have widened and the leverage is down,” says Kiffe.

Marcus & Millichap Capital Corporation (MMCC) is a leading source of real estate capital nationally. In 2019, the firm sourced and closed $7.8 billion in commercial debt and equity structures through 1,944 capital markets transactions across the U.S.

Our team of experienced professionals provides financing for a full range of property types and loan amounts. We position each property optimally to source capital and leverage state-of-the-art systems to execute with maximum reliability.

Whether you are seeking to pull cash out of an asset, reduce monthly payments, or secure better loan terms, our capital sources can provide the optimal refinancing package in both loan terms and loan proceeds. By aggressively sourcing funds through our network of different types of lending institutions, we are able to obtain the best capital fit to meet clients’ objectives.