The National Multifamily Housing Council (NMHC)’s Rent Payment Tracker found 91.3 percent of apartment households made a full or partial rent payment by July 20 in its survey of 11.1 million units of professionally managed apartment units across the country.

This is a 2.1-percentage point decrease from the share who paid rent through July 20, 2019, and compares to 92.2 percent that had paid by June 20, 2020. These data encompass a wide variety of market-rate rental properties across the United States, which can vary by size, type, and average rental price.

“The extended unemployment benefits and other government support that have proven critical to keeping apartment residents in their homes expire in just a few days,” said Doug Bibby, NMHC President. “Lawmakers are currently negotiating, but Members of Congress and Trump administration leaders need to understand that unless comprehensive action is taken now to protect the tens of millions of Americans who live in an apartment home, they risk destabilizing the nation’s housing market, undermining the nascent economic recovery, and turning the ongoing health and economic crisis into a housing crisis.”

The NMHC Rent Payment Tracker metric provides insight into changes in resident rent payment behavior over the course of each month, and, as the dataset ages, between months. While the tracker is intended to serve as an indicator of resident financial challenges, it is also intended to track the recovery as well, including the effectiveness of government stimulus and subsidies.

However, noteworthy technical issues may make historical comparisons imprecise. For example, factors such as varying days of the week on which data are collected; individual companies’ differing payment collection policies; shelter-in-place orders’ effects on residents’ ability to deliver payments in person or by mail; the closure of leasing offices, which may delay operators’ payment processing; and other factors can affect how and when rent data is processed and recorded.

Total unit counts may change as units are leased or vacated and survey methodology is refined. 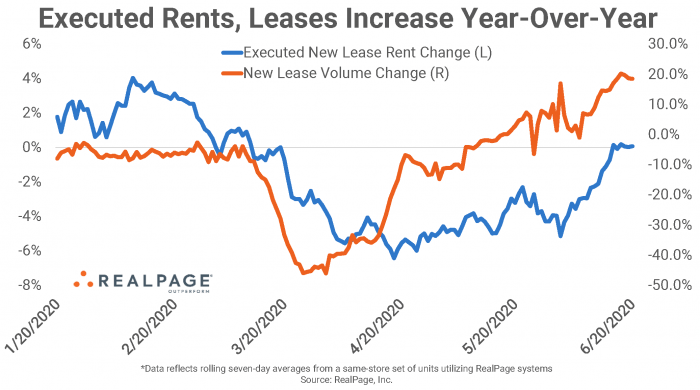 When COVID-19 hit in mid-March, U.S. apartment operators were quick to cut rents as demand all but evaporated. And now, as leasing volumes surge, rent cuts are quickly disappearing in most big U.S. metros – with the notable exception of most of the nation’s largest Gateway markets.

In the week ending June 20, executed rents for new leases inched up 0.08% compared to the same time last year. While this growth is minuscule, it’s a sharp departure from three months of steady rent declines. At one point in mid-April, executed rents nationally were down as much as 6.4%.

Executed rents reflect prices in actually signed leases sourced from same-store rent rolls in millions of units running on the RealPage platform. Executed rents are a real-time indicator of market movement – very different from asking rents or “effective rents,” which tend to be lagging indicators reflecting all available units without visibility into what’s signed versus what’s offered. Executed rents not only include concessions (which are often unadvertised and offered during lease negotiations) but also factor in lease term lengths since rents can vary based on the term.

Continuing a pattern seen since COVID-19 first hit, large coastal markets are generally the exceptions to the rule. Executed rents dropped by double digits over the last week in Boston, New York, Los Angeles, San Jose, and Oakland. Rents were also down sharply in Minneapolis/St. Paul and San Francisco. In general, these markets are also not benefiting from the rebound in new lease demand.

Sun Belt and Midwest markets are driving the pricing rebound, just as they have on leasing volumes. Among the nation’s top 50 markets, 30 recorded positive growth in executed new lease rents during the week ending June 20. The largest gains came in what would typically be described as slow-and-steady markets, including Virginia Beach, Memphis, St. Louis, Greensboro, Jacksonville, Columbus, Tampa, Cleveland, and Kansas City.

Nashville was also a strong performer in spite of concerns about its exposure to the travel and leisure industries. Three West Coast metros – Riverside, Sacramento, and Portland – broke the mold and outperformed their peers.

Most hot-growth Sun Belt markets recorded flat to modest gains in new lease pricing. That included Dallas, Fort Worth, Charlotte, Phoenix, Houston, Denver, and Las Vegas. Those were perhaps the most impressive results given high lease-up volumes in most of those markets, reflecting the resiliency of those high-demand Sun Belt metros.

However, a spike in COVID-19 cases in many of those metros will provide a big test over the next few weeks. It’s too early to conclude that new lease pricing has effectively recovered, particularly given continued uncertainty about the state of the economy and the looming expiration of expanded unemployment benefits coming at the end of July.

While new lease pricing shows signs of recovering, renewal lease pricing remains volatile. Renewal pricing returned to positive territory for much of May before dropping back down in June. In the week ending June 20, executed renewal rents dropped 1.9% compared to the same time last year. The cuts could reflect public sensitivities around renewals, as well as operator priorities, focused on high occupancy and longer lease terms.