Though mortgage interest rates remain historically low, the average 30-year fixed rate reached its highest level since 2011. Rising mortgage rates in conjunction with home values that have appreciated more than 64 percent over the same time period are discouraging many potential homeowners from making offers due to their inability to afford mortgage payments. Because of the rising costs, the pace of sales has declined each month since March. The increasing costs of homeownership, as well as changes to tax laws that removed some advantages to own, will continue to weigh on home sales activity this year.

The nation’s single-family housing market appears to be at a stalemate. Listings of single-family homes remain flat year over year, and new-home construction has slowed due to reduced demand. Sales of newly constructed residences remain concentrated in higher price tranches, squeezing first-time homebuyers out of the market. In addition, existing home sales among first-time buyers was 31 percent during August, remaining below the 40-plus percent that was typical prior to the recession. First-time buyer activity will remain constrained as many current homeowners who are locked into low-interest-rate loans elect not to list would-be entry-level homes. Single-family homebuilders are also unable to fill the need as elevated land and materials costs, which have been impacted by tariffs, make it difficult to construct starter homes.

Strong job growth is sparking household formation, but demand is concentrated in apartments. The result has been tightening multifamily vacancy despite elevated completions. Nationally, nearly 82,900 units were constructed in the third quarter, but the positive absorption of more than 107,000 units pushed down the third quarter apartment vacancy rate 40 basis points from the previous quarter to 4.2 percent, the lowest level since 2001. Shifting dynamics in the single-family market will continue to benefit apartments through the remainder of 2018, as the year-to-date positive net absorption of units is on track to reach the highest level since 2010. 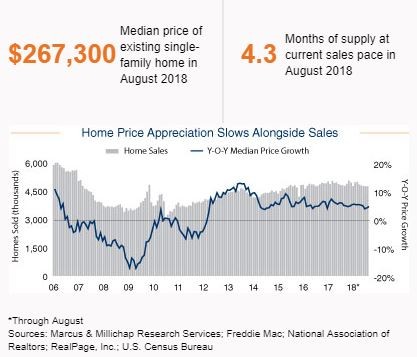 ■ The spread between owning and renting will weigh on single-family sales as the monthly mortgage payment for a median-priced home is now $339 more than the average monthly rent for an apartment, the highest spread since 2008.

■ New-home sales peaked in November 2017 and have fallen 11.7 percent since that time. Sales of assets above $300,000 shrank as a percentage of total new-home sales, contributing to the median price of a new home rising more slowly over the past 12 months, reaching $320,200 in August, a year-over-year gain of 1.9 percent.

■ Population and household growth are anticipated to grow faster in the suburbs versus urban core areas through 2025. Apartment vacancy in suburban areas peaked in 2010 at more than 7 percent but has recently tightened below 4.5 percent, resting slightly above the vacancy rate in downtown areas.