The two government-sponsored enterprises are on track to match 2019 origination volumes.

Freddie Mac and Fannie Mae are on track to lend nearly as many dollars to apartment properties in 2020 as they did in 2019. They have even loosened rules created in the early months of the COVID-19 crisis that required new multifamily borrowers keep enough reserves on hand to ensure they could make loan payments for as long as 18 months.

“These guys are going to do everything they can to backstop the market,” says Richard Katzenstein, senior vice president and national director of Marcus & Millichap Capital Corporation, based in New York City. “They are looking to put out as much capital as they can.”

In the first months of the crisis, Freddie Mac and Fannie Mae asked new borrowers to reserve enough money to pay the debt service on their loans for between six and -18 months, including both payments of principal and interest. Those reserve requirements are now often waived for new loans that are not as large as the maximum the agencies allow.

“Once you go up to the maximum proceeds—80 percent of the value of the property—then they want the reserves,” says Katzenstein.

Freddie Mac and Fannie Mae lenders have not added other requirements on multifamily borrowers. In contrast, for homeowners, they have added a 50 basis point fee on new home loans that refinance existing mortgages that are delivered to the GSEs as of December 1, 2020. The fee will help cover likely losses to the portfolio of home loans in difficult economic times to come.

“There is nothing like that on the multifamily side,” says Dave Borsos for the National Multifamily Housing Council (NMHC).

On the volume side, both government-sponsored enterprises are on track to match 2019 origination volumes. That’s a stark contrast to many other parts of the commercial real estate finance and investment world where there have been steep drops in activity year-over-year. It also comes amid the  FHFA continuing to lay the groundwork for the agencies’ exits from conservatorship.

“The industry entered the current recession on solid footing and is well-positioned to absorb the impacts of the recession due to substantial growth over the past several years,” says Steve Guggenmos, vice president of Multifamily Research and Modeling at Freddie Mac.

Other types of lenders, including banks, life companies, conduit lenders, and others, are expected to make 20 percent to 40 percent fewer loans in 2020 compared to the year before, according to Freddie Mac.

“While we anticipate the total multifamily volume [from lenders of all types] to decrease in 2020, Freddie Mac is supporting lending liquidity as other market participants moved to the sidelines,” says Guggenmos. Even though relatively few borrowers are now seeking financing to buy apartment properties, Freddie Mac and Fannie Mae are replacing much of the acquisition financing they usually provide with refinanced loans to apartment properties.

Freddie Mac offers 10-year loans that cover 80 percent of the value of an apartment property to strong loan sponsors with interest rates fixed at 230 to 245 basis points over the yield on U.S. Treasury bonds, with a floor on Treasury bond yields of 50 basis points, according to Marcus & Millichap.

Other types of lenders also offer competitive interest rates but at lower levels of leverage. “Interest rates offered by banks are competitive. But they are dialing back the loan-to-value (LTV) ratios… maybe not 70 percent, maybe 60 percent of 65 percent,” says Katzenstein

So far, the economic crisis has not caused measurable damage to the multifamily loans held by Freddie Mac and Fannie Mae. The number of their borrowers who have missed loan payments and asked for forbearance has not grown much, despite the economic chaos caused by coronavirus, according to NMHC’s analysis of data from the government-sponsored entities. “There is some uptick in the beginning, but it’s been level from then on,” says Borsos.

Of the borrowers that have asked for forbearance on their loans, the vast majority (75 percent) are small loans of just a few million dollars each. “These may be mom and pop investors in apartment buildings,” says Borsos. “Those may be the ones that are struggling.” 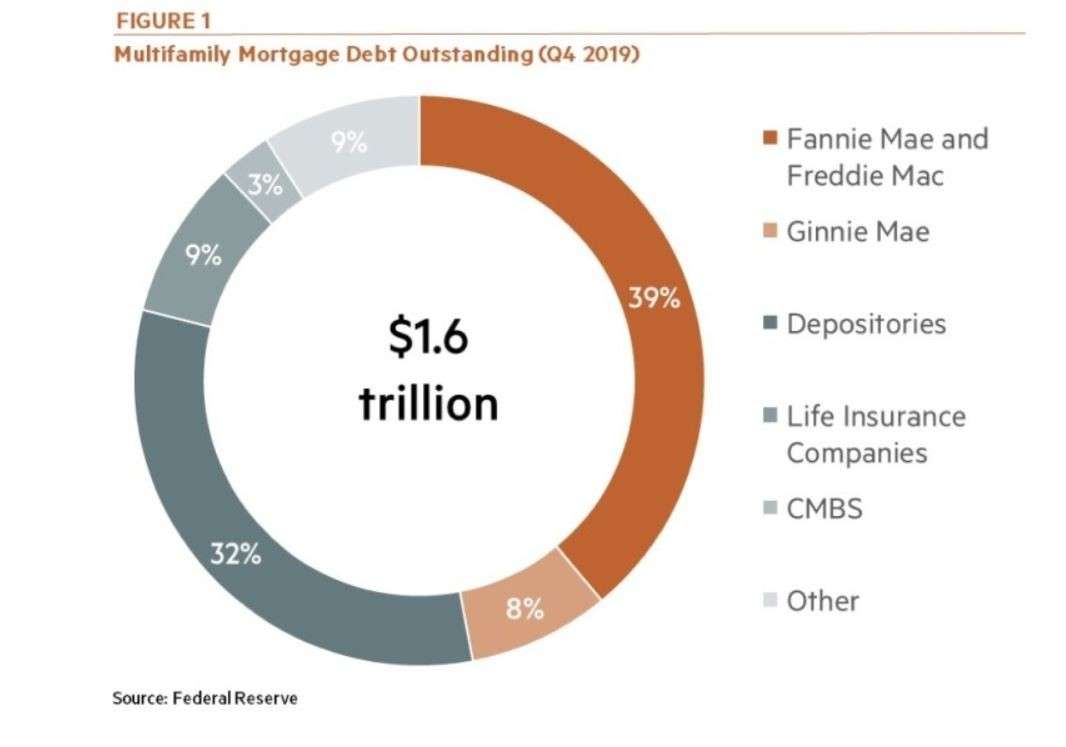 Nearly half of multifamily mortgage debt outstanding is backed by the federal government and, thus, stands to benefit from the CARES Act and recent actions from the Federal Reserve.

In an effort to ease the burden caused by COVID-19 to both apartment renters and owners,  the CARES Act offers loan forbearance on federally backed mortgages to multifamily owners who suspend evictions for their tenants.

Given these federal actions, it is important to remember just how much multifamily mortgage debt is held by Fannie Mae, Freddie Mac, and other government agencies.

This means that nearly half (47%) of all multifamily mortgage debt outstanding is backed by the federal government and, thus, qualifies for the loan forbearance conditions detailed under the CARES Act.

For some perspective, this is a higher share than during the Great Recession. For example, in 2009, Fannie, Freddie, and Ginnie held a combined 36% of the total multifamily mortgage debt outstanding. A decade earlier, in 1999, they held just over one-fifth (21%).

The National Multifamily Housing Council (NMHC) views these federal legislative and regulatory actions as critical in supporting the multifamily mortgage market. While  NMHC Rent Payment Tracker information to date indicates that the vast majority of apartment households continue to meet their rent obligations, should the stresses of the COVID-19 crisis significantly affect apartment residents’ financial health going forward, it may, in turn, hinder apartment owners’ abilities to meet their mortgage debt obligations.

END_OF_DOCUMENT_TOKEN_TO_BE_REPLACED

Agency lenders are making more permanent loans than ever on apartment properties.

The adjustment is based on increased estimates of the overall size of the 2016 multifamily finance market, which the FHFA said is larger than it had previously estimated due to continued high levels of property acquisitions and deliveries of newly constructed apartment units, as well as record levels of loan maturities requiring refinancing.

The liquidity boost is good news for investors in large institutional quality apartment assets, as loans for affordable rental units and underserved market segments will continue to be excluded from purchase caps imposed on Fannie and Freddie by FHFA.

“FHFA engaged in a thorough analysis of the multifamily market and determined that, to adjust to the realities of the market and ensure that Fannie Mae and Freddie Mac have the flexibility to continue supporting this important sector, an increase in the lending caps is warranted,” said FHFA Director Melvin L. Watt.

The multifamily lending caps are intended to further FHFA’s strategic goal of maintaining the presence of the Enterprises as a backstop for the multifamily finance market, while not impeding the participation of private capital.

Last week, we reported that Fannie Mae had issued $12.6 billion of multifamily mortgage-backed securities in the first quarter of 2016 compared to $10.4 billion in the same period last year.

Fellow GSE Freddie Mac also appeared to be pacing ahead of its multifamily-securities issuance. Through the first four months of this year, Freddie Mac had announced pricing of nearly $14.8 billion in securities offerings. That was almost double the announcement of $7.7 billion for the same period last year.